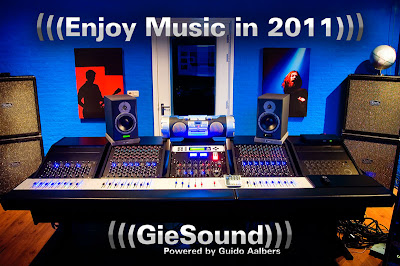 Email ThisBlogThis!Share to TwitterShare to FacebookShare to Pinterest
Labels: Studio

Sorry it took me so long to update this news-section!

Here's what I have been doing lately:


I mixed some livetracks for former Krezip singer Jacqueline Govaert. The songs were recorded live at Paradiso, Amsterdam and prove that Jacqueline is still going strong.

Recorded, mixed & produced a cool single for Latvian superstar Linda Leen.
It's sort of a duet with one of our biggest artists: Alain Clark. The song is called "Wild & Free" and will be released in a couple of countries.
It's a very catchy track written by the both of them together.
I first recorded the instruments with some great dutch musicians, after that Linda flew over to record her vocals together with Alain at GieSound.
And I mixed it the day after. So everything went down in just a couple of days; very cool experience!
(more on this later?)

Recorded & mixed the second album of blues(rock) band The Veldman Brothers. This time the recordings took place at Legacy Studio in a live setting. So without any overdubs! (we only re-did some vocals at my studio).
The album will show the true quality of these sublime blues guys. They know how to deliver excellent blues with an electrifying and dynamic performance.
Here's a 'making of video' I shot with my iPhone to give you an idea of the studio setting @ Legacy:

Releasedate: january 15th. Check your recordstore, Bol.com or iTunes. The album will also be released in the USA!


I am producing 2 songs for the (Eurovision) Songfestival for the 3J's. We did the major part of recordings at the famous ICP studio's in Brussels (I just love that place!).
After Brussels we did some additional recordings at the Votown studio and at GieSound.
I will be mixing these powerfull songs pretty soon. You will be surprised!

Just finished a single-mix for Ilanois. It was produced by Simon Gogerly (U2, No Doubt) so I was honored that they asked me to do the single-version. "Starin' into Mine" is a stunning song that starts real quiet, and has a dramatic buildup wich leads to a big wall of sound.
Very challenging track to mix :)
It will be released by record label PIAS. Ilanois has been selected by radiostation 3FM as "Serious Talent".


Also did an ass kickin' single-mix for brand new recording artist (&producer) Bryan Bourne. Bryan is a very cool singer! I would describe his music as a nice blend of N*E*R*D, Michael Jackson, Timbaland and a snif of Techno ;)
We are going to find him a record company now (or maybe that's oldfashioned?)