Wilsum and Veldman Brothers in charts 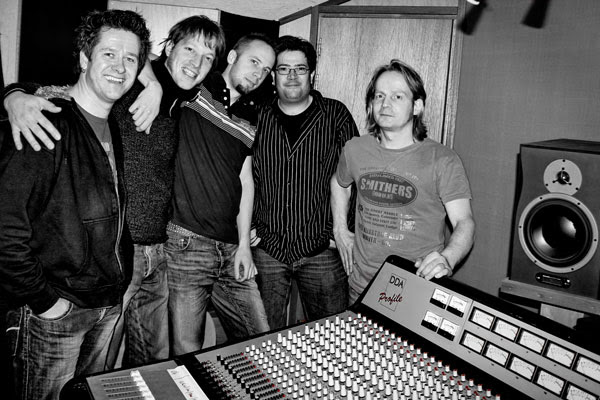 I told you about the new Nou En single called "Roos" wich I mixed. It's already on the TMF playlist.
Here is the videoclip:

I received some emails asking if I did any foreign bands recently, since all news-items are about Dutch bands. Well I did... How about:

• My Brightest Diamond
• Parts & Labor
• Menomena
• Jeffrey Lewis
And because of the flu, I had to cancel recording Les Savy Fav today. Unfortunately!
On my schedule: 3 days of London Calling and Beirut!
I just worked on a another project with the well known arranger Rik Elings (wich will be released all over the world). Rik made arrangements for lot's of different artists and worked for different orchestra's and big bands. He did over 300 pieces for The Metropole Orchestra.
It will be released by music-publishing company De Haske.
We also did some sessions for De Haske ("Play 'em Right - play along II") with trumpet-player/arranger Erik Veldkamp. Erik is a member of the Dutch Jazz Orchestra and the Glenn Miller Orchestra (Europe).
by Guido Aalbers on 17:03 0 replies

Newspaper 'De Stentor' wrote a 2 page-special last tuesday about the local music-scene Zwolle/Kampen. Including interviews with Jeremy's, Wilsum... and ehhh... I was also interviewd. That part of the special can be found online HERE. [sorry article in Dutch only]
According to the article I am one of the "floating forces" hehe  ;-) LOL
by Guido Aalbers on 17:08

Hits, TMF awards and other news...

Jeremy's single Saturday is in the charts for the 3rd week now!!!!
Also don't forget to continue voting for them @ TMF awards. All you have to do is go to www.tmfawards.nl and vote. (click on 'STEMMEN' in the upper menu)
Last saturday Wilsum released their self-titled debut album with a nice party & gig at the Hedon venue.
Wilsum is retro; their songs sometimes remind you of the good old days when The Who / Grand Funk Railroad / Led Zeppelin / Black Sabbath (and more) were still going strong. These guys are really into vintage equipment, that's why we also used a lot of old techniques, equipment and microphones to capture their sound. So don't expect a smashed-to-death-modern-rock-sound, because that's NOT what you are going to get. What DO you get? Groovy guitar, ramblin'bass, angular drums and screaming vocals combined for a high energy, kick a$$, dynamic, rock&roll overdrive!
And of course it's not only released on CD, but also on vinyl. Check their MySpace page and listen to some songs.
More release party's:
Both Cool Genius and Heavens Devils are releasing stuff on the 19th of october.
Cool Genius will present their debut album ('Maybe you should do that too') in Hedon Zwolle. Heavens Devils are throwing a big party for the release of their EP ('Kings and Killers') in Diana, Assen.
So pick your poison...
by Guido Aalbers on 17:10