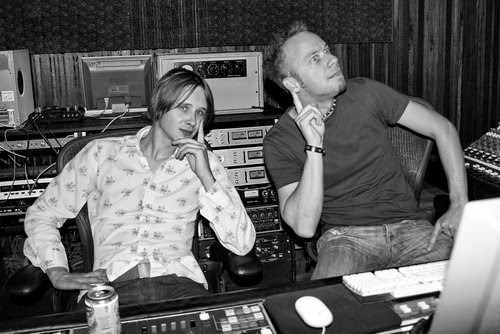 Yeah I know... It's been a long long time since my last news update. I am sorry, but I was just f@#king busy.
And since I am still very busy, I won't tell you about the construction work on my home (I was actually mixing concreet instead of songs!), and some other projects I did before the summer hollidays (sorry to all that feel ignored now ;-))

What I do have to tell you about is this big project I am working on right now. Do you remember Bertolf? He used to be the singer of a band called The Junes, and after that he played guitars in Ilse de Lange her band. Well, I am recording and (co-)producing his debut album at the moment.

We started out recording drums at Studio Lobbes, then moved to ICP for 7 long studio days. After that we did some vocal recordings in Zwolle. This weekend we returned from Brussels after recording yet another 7 days at the famous ICP studio's.
On the last day at ICP the guys from the record company came by and we played them all the recordings we have made. (Although some are still missing leadvocals and other additional stuff). We actually recorded more songs than there needed to be on the album, so we got together and decided wich songs are going to make it on this cd.
All the backingtracks are done now. Some more leadvocals, backingvocals, strings and percussion need to be recorded in the next 2 weeks. I can't wait to start mixing, cause man this is gonne be a great album! There are gonne be a lot of amazing songs on this album. Ranging from intimate acoustic to dynamic songs with lot's of layers. Melancholic being the keyword to sum it all up.
Bertolf made a couple of small video impressions [watch em all]:


I also posted some new pics in the photo-section of my MySpace
At ICP they have a huge collection of guitars, basses, amplifiers, keys, drums, FX-pedals. So we were able to create and capture every sound we wanted and we used a lot of vintage stuff for it. The amazing part is that (besides drums) Bertolf plays every instrument himself. Lapsteel, wurlitzer, hammond, guitar, rhodes, bass, moog, banjo, mandoline etc. etc.
As soon as I have any news on when the first single and the album will be released I will let you know.


Short other news:-Jeremy's (aka THE Jeremy's) new single (I want a Girl) will be out soon. They played almost everywhere for the last couple of months, including Lowlands and Goffertpark.
-Dolorous Daze debut album is scheduled to be released pretty soon now. Their new single will be Shine, wich I think is a real good radio song.

That's all 4 now...
There is much more nice stuff comming up on my schedule.
I'll try to keep you posted
Gie
by Guido Aalbers on 13:33 0 replies