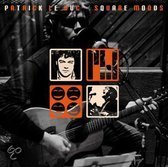 Not famous yet, but I see a nice future ahead!
by Guido Aalbers on 13:56 0 replies