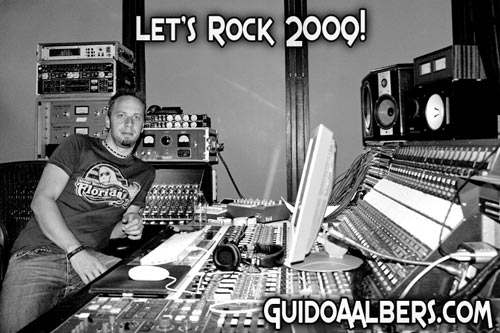 The best wishes for all of you.Keep going strong in 2009!

Talking about going strong ;-) Bertolf's first single "Another Day" is launching his career with rocketspeed. Radio 3FM declared it the first megahit of 2009, and I assume it will hit the top ten of the charts in a couple of days.

The album (For Life) was due to be released on the 9th of january 2009, but since everything is going so well, it is already being released.


Besides all the radio & tv appearances Bertolf and his band are also going to hit stages everywhere. Two important shows comming up: Noorderslag festival on the 17th and supporting James Morrison on the 14th of january in the HMH. Go check em out!

I also recorded a single with Nina June.
It's gonne be something different then you might know from her. I am going to mix/finish it next week and will post more details once it's ready. I can tell you however that it's a very very nice song! [keep you posted!]
"Just a Flirt" the hitsingle I did with Miss Montreal is still being played a lot on the radio. It reached number 4 in the charts, wich makes me very proud.
At the moment we are scheduling the recording of her second single and her debut album. So you can expect the new Miss Montreal single by the end of february (I guess).
Dolorous Daze's single 'Shine' will be released on the 26th of January 2009! It's the second single of the forthcoming debut album 'Headstart', which will be released on the 27th of Febuary. I think Shine is a real good radio song. You can check snippets of their songs on their MySpace
There is more to come... 2009 has so much nice things comming up!
These were the highlights for now; I will try to keep you updated.
Gie
by Guido Aalbers on 12:41 0 replies